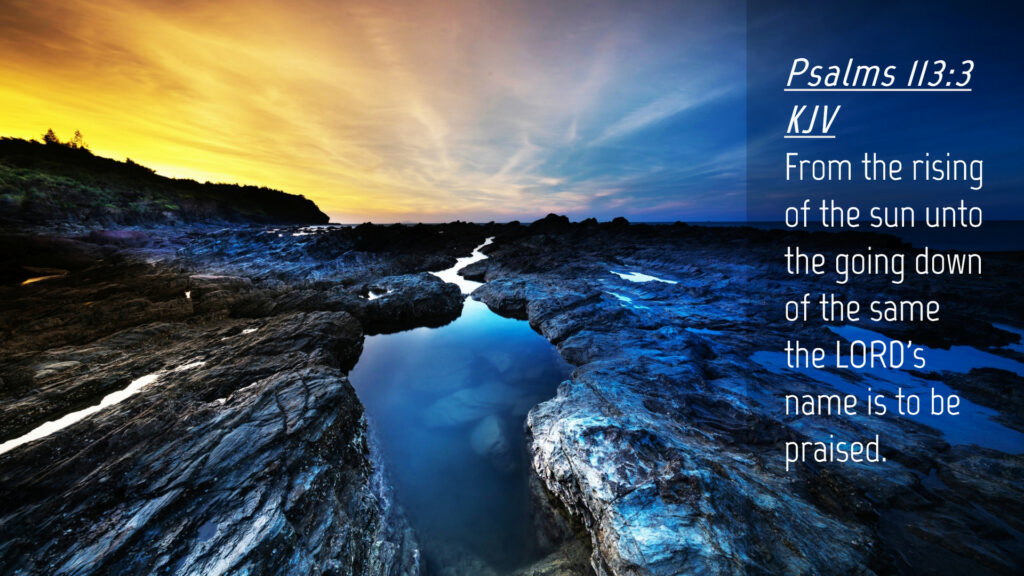 Praise the Lord! Praise, O servants of the Lord, Praise the name of the Lord! 2 Blessed be the name of the Lord From this time forth and forevermore! 3 From the rising of the sun to its going down The Lord’s name is to be praised. 4 The Lord is high above all nations, His glory above the heavens.  Who is like the Lord our God, Who dwells on high, 6 Who humbles Himself to behold The things that are in the heavens and in the earth? 7 He raises the poor out of the dust, And lifts the needy out of the ash heap, 8 That He may seat him with princes— With the princes of His people. 9 He grants the barren woman a home, Like a joyful mother of children.

After a long process we are finally in Sun Valley, Los Angeles, America. At the outset I must say that the Lord has had a hand in each and every process and we are extremely grateful to our Saviour Jesus Christ who wants to see His work and Kingdom expanded in this area, and we are blessed to be able to continue on a solid foundation that has been laid by the Lord at Sun Valley Community Church. My intention is not to bore you with unnecessary information but just to simply give an update on what the Lord has done thus far and to ask for continaul prayer by His grace.

After an 8 1/2 hour flight to Doha (Qatar) and a further 15.5 hour flight to Los Angeles we arrived safely. From the time we received our visas to the time we set foot on American soil the process was seamless and we thank the Lord Jesus for this . We left Johannesburg on the 26th of October 2022 at 7:00 AM in the morning, being put in the same row with a brother from Nelspruit who loves the Lord and was on his way to Adelaide. After take off however, I was moved to a different seat where I was given more leg room. This was a blessing from the Lord. After arriving at Doha we were blessed by friends to the Al Marjoun lounge where we spent eight hours. We refreshed by having a shower, we ate well, and rested up before our next leg to Los Angeles. We departed for Los Angeles at 01:30 am and arrived in Los Angeles at 8:00 am. This was a long flight but the Lord was gracious in giving Kelly and I some much needed rest and some good meals, which by the way when flying for such a long time, can become a problem as you just eat as there is nothing else to do. After arriving at LAX we were taken to customs by Wendy, a lady from Los Angeles with a Hispanic background who helped us and answered a few of our many questions. Wendy is part of a local fellowship and we obviously chatted about the Lord :).

We bypassed the customs queue that was for those that came off the same plane! This was because I was under the special assistance banner and we were taken straight to Corrall at customs police, a guy about 6”5 and 130 kg. He asked us a few questions, and praise the Lord all went well. We were off to collect our luggage at the carousel finally coming through the basement onto a platform which at any given time can have over 500 people, empty, and praise the Lord there brother Anton walked in to collect us, take us outside, and load our luggage into the Ford pick-up truck. Robert a brother from church owns this bakkie, and we were then set and on route home.

In true American style however we stopped at Starbucks where Robert spoiled us to a coffee. We then headed home to Shadow Hills Sun Valley which was a 45 minutes drive from Los Angeles airport. We arrived home safely where we were greeted by and Anton’s wife Ina. After showering, and unpacking, and being told by various people to stay awake as long as I can, we ended up relaxing, and getting to know one another more. This prolonged fight against sleep was extremely difficult as my body had taken a hammering on the plane and I so wanted to go to sleep but had to try and fight this fatigue in order to go to bed at a decent time and not wake up with jet lag. I remembered I did the same thing in Doha while waiting for the departure time and by the time the aeroplane had settled in the air which was about 3:00 am I was absolutely shattered and wanted to sleep as soon as possible, but had to wait for the food to be served so that I can go to sleep.

Back at home on arrival day Kelly started getting really tired at around 14:00 PM and by 16:30 PM she was fast asleep and wasn’t waking up for anything. I managed to stick it out until 19:30 PM where I headed off to bed and we both slept extremely well only waking up the next morning at around 6:00 AM. The obvious bladder interruptions did not mean much and we could both get some rest in waking us up on Friday morning with a lot to do. To understand the size of Los Angeles can only but sound like an exaggeration when explained unless one has witnessed it for himself. Early in the morning we headed off to the bank to open bank accounts for ourselves which all went smoothly praise the Lord and we are hoping to see Gustavo at one of the church services soon as he was invited and if he doesn’t pitch it will make our dealings with him as our account manager awkward (not for us though). Nonetheless please pray for Gustavo to join us at a future service at Sun Valley Community Church.

We then headed home for lunch and soon were back on the road and headed to the SSA office where one can wait anything between 30 minutes and two hours for an appointment. As smooth as the bank process was so too was the process in me applying for my Social Security number which is a valuable number for each individual in America. This took 10 minutes and we were out and headed back home. Moving forward to Sunday, our first service at Sun Valley Community Church was awesome, and we were welcomed with open arms. It was a blessing to meet many of the folk and many welcomed us with a gift card, and the love of the Lord. This really warmed Kelly and my heart and we are truly thankful for each and every person who made this transition from South Africa to America a lot easier and a lot more exciting. We are currently in the book of Hebrews and as the Lord would have it we are in Chapter 11 which is the Magna Carta of faith.

What was extremely awesome as well as interesting is that our responsive readings for the morning came out of Psalm 113 and Psalm 114 and as many of you know Psalm 113 was the Psalm that was laid on my heart in hospital soon after I met the Lord! Here the Lord I believe was showing us and affirming that He has His hand on this process and that all we have to do is to trust Him and praise Him.  We were then welcomed with a potluck lunch where anyone who wishes too can bring a meal and so we shared in this meal, tasted new food, and fellowshipped. This was a blessing and a welcome that one could hardly forget. The next week was extremely busy as we are busy learning how Sun Valley Community Church is run, how the Americans differ from South Africans with regards to labour, painting, roofing, tarring, office work, financials even extending to alarm systems, electricity supply (which is on by the way) and gas.

We learned a lot this week but wanted to praise the Lord as His servants that we are able to learn, to process, and to embark on this journey that the Lord has put us on. We have been blessed to be able to have Anton and Ina with us and we appreciate everything that they have done for us, a blessing which makes a transition into another country a lot easier. My intention is to share the highlights and the low-lights and the prayer points with you so that we can all, even though being miles apart from one another, keep each other in prayer, especially praying for us in this mission that the Lord may be blessed, glorified, exalted, worshipped and praised! You may ask why, and the simple answer is this ….

For He alone is worthy!